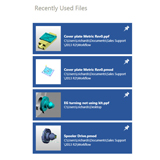 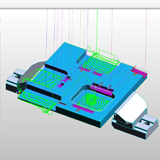 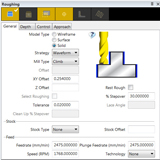 The most far-reaching enhancement in 2013 R2 is Workflow, enabling CAD/CAM engineers to apply toolpaths within seconds. Other powerful items of new and enhanced functionality include modern redesign of dialogs, four-turret support, free loading of CAD files into Part Modeler, quicker simulation, and improvements to the Wire EDM Feature Finder.

The new tools aid in loading and positioning the component, choosing the manufacturing method and suitable machine tools, adding user defined stock or stock from a database, importing fixtures, selecting a machine and toolkit, and managing strategies to automate manufacture. At each stage Workflow takes decisions or makes suggestions as to how the goal is best achieved. However, the user can easily over-ride the decisions if required, making the whole process flexible.

Part Modeler now comes with free CAD Model Loaders for Parasolid, STEP, NX, ACIS, Inventor, CATIA V5 and Creo Parametric files. A Move Hole and Faces command allows the repositioning of features from models designed in another CAD system. They can either be moved from the original CAD datum position or relative to a user defined position. To modify features – for example holes, grooves, pocket walls and boss heights on a third party model, individual feature can be moved to create a “Manufacturing Model” from a design model, allowing for mid tolerancing models to be created and manage conditions created, such as expansion, when using heat treatments.

Simulator now runs as a separate process to SURFCAM providing the following benefits.

Simulator rendering has been enhanced. By default, stock surfaces are rendered with a metallic look. And a Flat Rendering option has been added to render the surfaces with a non-metallic look. Rapid Result has been improved for this release and Tool graphics are now displayed, with Toggle Tool and Toggle Tool Holders buttons enabled.

A new Wire Profile Feature command has been added to find features suitable for Wire Erosion from a solid. This facility removes the need to extract the edges from the solid to make the wireframe fences. Other improvements to the Wire EDM include:

Typically, when milling cycles are applied to features, they are applied feature by feature using the Planning Board. This can lead to multiple identical cycles in the sequence browser with, for example, one cycle for each pocket.

Rationalize can now merge these cycles into one cycle, as is already done for hole cycles. When merge milling cycles is checked in the Rationalize dialog, cycles that are machined by the same Tool on the same CPL and whose dialog settings are identical are merged.

The benefit of merging the cycles not only makes the machining sequence shorter and easier to manage but the merged cycles inherit the toolpath ordering of the cycle. Initially, this has been implemented for the Roughing and Profiling cycles.

The Milling cycles have been updated to allow boundaries to be selected directly from Solid Edges of EdgeLoops without the need to create geometry edges or EdgeLoops first. If the edges are not parallel to the current CPL, they are automatically projected in to the CPL to form a 2D boundary.

A new Finish Groove cycle utilizing the same processing as the Finish Turn cycle has been implemented to provide capabilities not available previously and to improve compatibility between the cycles.

The main advantages are:

Custom attributes can now be added to the Feature group of the attribute template which create new properties for Mill, Turn or Hole features. These attributes appear in the SURFCAM feature properties window and can be set to communicate information to a strategy to affect the manufacturing process.

A new Merge Nested Groove Features Turn option is available on the Feature Finder dialog. The new option allows grooves to be merged into larger grooves.

A Turret Holder Mating option has been added to the Tool Mounting Parameters providing for machines fitted with index turrets that have keyed recesses into which pre-assembled keyed tool holders can be mounted.

A Holder Origin option has been added to the Tool Mounting Parameters which can be set to either the Insert Center (Turning tools) or Flute Height (Milling and Hole tools), Tool Tip or Gauge Datum

A Coolant option has been added to the Tool Mounting Parameters allowing you to specify whether the tool can pass coolant and the method used (Off, Flood, Mist or Air). The Through Coolant option in the Tool Geometry Parameters has been enhanced to provide a High Pressure selection.

A Draw tool clearance option has been added to the Setting Preferences.

This option is used to display a ghosted image of the insert shape which will be used to generate the turn cycle offset including tool clearance angles.

A number of Index Turret / Holder Mating options have been added to the Loading Parameters providing for machines fitted with index turrets that have keyed recesses into which pre-assembled keyed tool holders can be mounted.

Users can now convert CGDs from Inch to Metric and vice versa. A Machine Units conversion can be applied to existing CGDs. A warning will be displayed to ensure that the user realizes that the stored values will be changed. Relevant data in the post will be converted in addition to the graphics (both parametric and non-parametric).