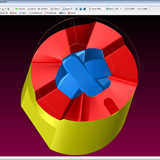 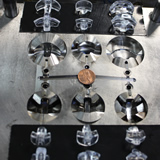 It’s no secret that getting from art to part is what manufacturing is all about — or that turning an intriguing concept into concrete reality is easier said than done.

For Thomas and Alan Valentine, brothers and co-owners of Intriguing Concepts, LLC, tackling the toughest jobs is a task built for two.

“It’s a good combination,” says Thomas of working alongside his older brother, Alan. “He’s really good at seeing a part and being able to bring it to life. I’m good at cutting it.”

Based in Harrison Township, Michigan, Intriguing Concepts has been materializing the concepts of its customers since 2004.

“Our customers say, ‘We have this idea. Can you help me bring it to life?’ ” Alan says. “Like us, a lot of our customers are very innovative people, and we are here to help them through all aspects of developing their products.”

Though the lion’s share of the workload at Intriguing Concepts is the manufacturing of plastic injection molds for the medical and electrical industries, the business also produces a fair share of automotive, hunting, and dairy parts.

“We did have a former system, but SURFCAM was much more powerful and much more user friendly. I can train an employee in SURFCAM and make him somewhat fluent on it in less than a week.”

“We make pumping diaphragms with some assemblies that require seven or eight working components,” Alan says of the company’s dairy work. “Those are sometimes fun — or challenging, as I say. If you say it can’t be done, you’re putting me on a mission to prove you wrong.”

Alan’s can-do attitude is an ideal match for the prototype development and manufacturing that accounts for 75 percent of the company’s business. Production accounts for the other 25 percent and is accomplished with the company’s 10 molding machines, which range in size from 15 to 90 tons.

While it is heavy on the concept aspect, Intriguing Concepts fills a unique niche as a one-stop shop for both mold prototyping and production.

To accomplish its mission, the Valentine brothers employ three staff members, a range of machinery, and the SURFCAM computer-aided-manufacturing (CAM) solution by Vero Software.

Thomas acquired SURFCAM in the early 1990s, before the birth of Intriguing Concepts and after a new and more complex generation of machine tools was born. It was then that Thomas discovered trying to remain competitive was tough without a CAM solution.

““Well, I’m old-school,” Thomas says. “ The new generation of CNCs came out and manual programming was impossible on the new machines.”

To translate “impossible” into hours and minutes, Thomas explains, “What took 10 hours on a Bridgeport took 90 minutes on a CNC machine tool.”

Embracing new technologies was simply akin to remaining afloat in a competitive and evolving market. “If you can take eight hours of manual labor out of a job, you can obviously be a lot more competitive,” Thomas says.

Today, the Valentine brothers utilize a Mazak VTC 16B vertical machining center, a Haas VM-2 vertical mill, a handful of Bridgeport mills, a Jet lathe, and several surface grinders that are used for finishing work.

Intriguing Concepts machines in up to fours axes and, while many of the parts it makes aren’t especially complex, tight tolerances must be maintained — which adds to the overall challenge of production.

And, as Thomas explains, holding final products in the palms of their hands is a defining element for the company, which deals in small, precision parts. “Everything we do is small,” Thomas says. “If it doesn’t fit in our hands, we don’t make it.”

As the business’s sole CNC programmer, the job of cutting parts that live up to their intended purposes is largely Thomas’s responsibility. He chose SURFCAM because of its power and ease of use.

“It’s very user friendly,” Thomas says. “We did have a former system, but SURFCAM was much more powerful and much more user friendly. I can train an employee in SURFCAM and make him somewhat fluent on it in less than a week.”

While some customers simply “show up with a sketch drawn on a piece of paper,” Thomas’s programming job begins when he imports a solid model from the SOLIDWORKS ® computer-aided-design (CAD) solution into SURFCAM.

“They communicate well together,” Thomas says of SOLIDWORKS and SURFCAM. “I can import any file from SOLIDWORKS with no issues.”

Thomas cites several SURFCAM features that assist Intriguing Concepts with its ability to deliver what customers need while remaining competitive.

He credits SURFCAM’s 3D offset capability, or its ability to ensure that the part remains in constant contact with the end mill, for dramatic time savings on the shop floor. Thomas finds that SURFCAM’s 3D offset, also known as constant stepover, delivers superior surface finish. The 3D offset creates a single toolpath across the entire part, eliminating time-consuming lead-in and lead-out moves.

“That’s the most powerful tool in the package,” he says of the 3D offset function. “It’s so powerful that I can’t think of any job that I don’t use it on.”

Among the company’s recent projects was a six-cavity dental mold that produced six different parts ranging in size from ¾-inch to ½-inch. SURFCAM was used to program the family of intricate pieces.

“There cannot be any parting lines or burrs in the final product,” Thomas says. “It has to be a perfect part. It’s going into people’s mouths.”

Another SURFCAM function often used by Intriguing Concepts is rest machining, which enables the system to recognize the last tool used to cut so it can automatically apply a smaller tool in the correct size necessary to pick remaining material from the corners of the part.

“It calculates what has been removed and what still needs to be removed, and just goes to the corners and cuts,” Thomas explains. “If it didn’t calculate the areas that need to be removed, I would have to create boundaries — which takes more time.”

Another time saver for Intriguing Concepts is SURFCAM’s Z-rough cycle, which is a roughing cycle along the Z axis that is able to rapidly remove a large amount of stock.

“I can create almost a whole job by using just a Z-rough, Z-finish and a 3D offset,” Thomas says.

The ongoing technical support that Intriguing Concepts has received from SURFCAM reseller CIM Solutions & Networking throughout the years has also contributed to the company’s success.

“I especially like it when they host a user group meeting,” says Thomas. “Not only are they informative, but the people who attend usually add information to the meetings that are helpful for other uses of SURFCAM that they probably would not of known about otherwize.”

The Valentine brothers are pleased to report that business is not only good, but that it is up by 31 percent since last year. The company — which was initially established in the back of a friend’s shop — is currently in the process of expanding from one to two buildings, for a total of 10,800-square feet of shop space.

“I love what I do,” Thomas says. “I’ve been doing it for 30 years, but it’s different every day and, when I’m done, I get to hold that part in my hand and see what was accomplished.”

Thomas is quick to point out, however, that the success of Intriguing Concepts truly lies in his partnership with his brother.

“My brother’s gotten a reputation over the years: If it can’t be built, take it to Intriguing Concepts and they’ll figure it out,” he says. “Then they actually have a part that they were told they would never have.”