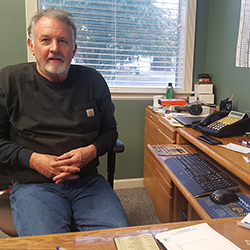 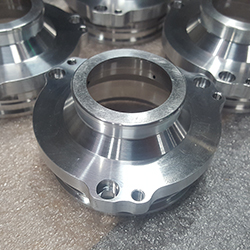 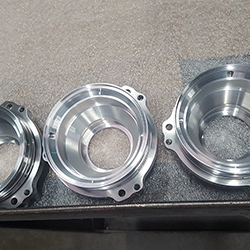 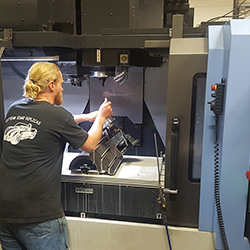 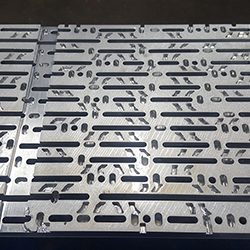 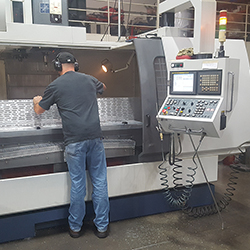 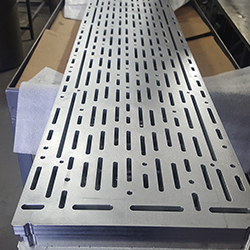 Any manufacturer who’s survived more than 30 years in business has weathered the usual ups and downs of entrepreneurship, and could write a “how-to” book with a chapter devoted to learning from mistakes.

Kurt Franklin, owner of DKW Precision Machining since 1984, has fared far better than many —  due in part to an adherence to high customer-service standards, continual process improvements, and an avid willingness to learn and embrace technology.

“Over the years, we saw a lot of manufacturing go overseas, and learned from experience that there is also a lot of unpredictability in manufacturing,” Franklin says. “It changed the way we do things because we realized that it is important to diversify and to grow intelligently.”

“We could see that our old software wasn’t moving along in development like the other systems, and we got SURFCAM so that we could do more advanced programming on more advanced machinery.”

Based in Manteca, California, the business co-founded by Franklin in a garage in San Jose with his brother, Doug Franklin, now serves numerous sectors, including the underwater exploration, aerospace and commercial industries. Counted among DKW’s customers are Schilling Robotics, which produces underwater remotely operated vehicles, or ROVs, and automotive manufacturer Tesla, Inc.

A born entrepreneur, Franklin decided that he was in manufacturing to stay and eventually purchased his brother’s share of the company. Having learned the value of quality service as owner of a motorcycle shop prior to opening the doors of DKW, Franklin has always placed a premium on customer relationships. “Our motto is to always treat customers the way that we expect to be treated,” Franklin says.

General Manager Brian Kott, who was hired as a shop helper and driver and has been with DKW for 23 years, believes that quality also sets the company apart. “Most machine shops can build parts on a CNC Mill, but to build a part and make it look great cosmetically can really set you apart.”

To produce its products, DKW utilizes a combination of CNC machinery and software designed to deliver both efficiency and the quality that customers seek. In 1998, Franklin purchased the SURFCAM Traditional computer-aided-manufacturing (CAM) solution, by Vero Software, after finding that his previous CAM system could no longer meet the company’s needs.

“We could see that our old software wasn’t moving along in development like the other systems, and we got SURFCAM so that we could do more advanced programming on more advanced machinery,” Franklin says.

Franklin recently also acquired, and is now transitioning into, the latest version of SURFCAM to address the complexities of driving his new mill-turn machine. However, he continues to rely on SURFCAM Traditional due to its ability to generate accurate, specialized toolpath. He programs his five mills and four lathes with SURFCAM Traditional, and will use the latest version of SURFCAM to power his new mill-turn machine tool.

Though the company doesn’t specialize in design work, DKW does work with customer design teams to make parts more manufacturable.

To create or edit computer-aided-design (CAD) models that can be imported into SURFCAM, DKW uses the SOLIDWORKS® CAD solution, by Dassault Systèmes, to generate or edit solid models that can be imported into SURFCAM Traditional. The software’s seamless and simple interoperability with the CAD solution allows users to open SOLIDWORKS files right within the SURFCAM Traditional interface. This feature increases ease of use for users of both systems and ensures that CAM data is updated when changes are made to the design.

“Even if you make a change in the SOLIDWORKS file, it will automatically update in SURFCAM,” says Franklin, who adds that the interaction between CAD and CAM solutions simplifies the design process.

DKW does not perform a significant amount of production, and so lot sizes typically range between one and 200 parts. About 70 percent of jobs are machined in aluminum, though the company also works with plenty of stainless steel, titanium, and pre-hardened metals.

Franklin appreciates the toolpath control offered with SURFCAM Traditional, which allows him to create custom datum points and edit specialized toolpath to suit the needs of the job, which may include adjustments specific to tooling and material. He notes that the software makes it simple to view and manipulate part models, with graphical tools that make it easy to identify changes that need to be made.

Among specialized SURFCAM Traditional machining strategies used at DKW is the TRUEMill cycle, which generates optimized roughing toolpath that can be completed with a one-step 3D roughing through pre-finishing operation. “Using the TRUEMill on certain parts with our newer machines allows us to remove material really fast,” Franklin says.

TRUEMill offers a synchronized multiple-tool strategy that coordinates up to eight tools in a single operation. Regardless of how many tools are used, the specialized cycle creates uniform step height across all surfaces while removing material at significantly faster rates and greater depths of cut.

Use of the TRUEMill cycle cut machining time on one of DKW’s jobs from 40 minutes to about 18 minutes. “Forty minutes to 18 minutes is a substantial amount of time, and it’s also easier on our tooling because you aren’t getting the tool hot and then cold, putting it through a continuous cycle of heating and cooling,” Kott says.

“If you can save 10 minutes per part on 10 parts, that’s over an hour and a half saved,” Franklin adds. “You’re not making money unless you’re throwing chips.”

Smart, continuous growth and process improvements are par for the course at DKW, which once employed 38 staff and currently employs a 10-man team — including Franklin’s son, who heads the mill department, and two of Franklin’s nephews. Franklin explains that the smaller team can accomplish just as much as his larger teams have in the past. Efficiency gains, he says, are the combined result of embracing advanced technologies and ensuring that personnel are well trained and knowledgeable.

“I believe that you have to invest in time and spend any extra time that you have on training,” Franklin says. “Even during the hard times, we still invested in training.”

“We could see that our old software wasn’t moving along in development like the other systems, and we got SURFCAM so that we could do more advanced programming on more advanced machinery.”