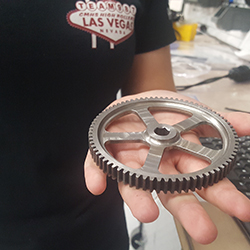 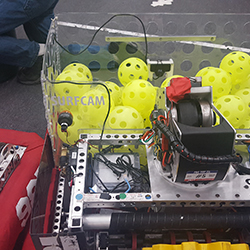 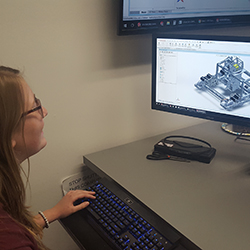 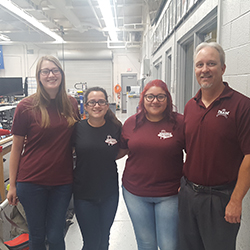 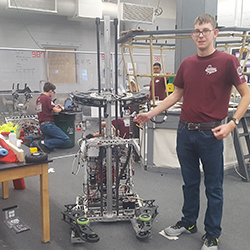 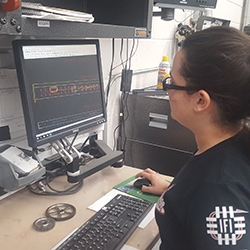 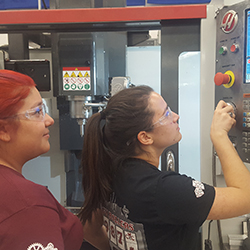 Battle of the ’Bots

Building a robot from scratch is no easy feat, but the challenge is just part of the fun for students on the Cimarron-Memorial High School Robotics Team —  aptly dubbed the Highrollers.

Designing and fabricating robots while honing collaborative and competitive skills has helped to make Cimarron-Memorial High School (CMHS) a real contender when going toe-to-toe against robotics teams from all over the world. For the CMHS team, being fully immersed in the practical application of STEM (science, technology, engineering and mathematics) skills has led to the thrill of triumph and the pain of the occasional defeat.

“The robotics team is the reason that I wanted to go to this school,” says Aspen Anderson, who, as the team’s computer-aided-design (CAD) specialist, is in charge of generating workable CAD prototypes upon which the team’s robots are based. “I think it’s cool to be able to think of something that’s completely in your head, then turn it into something that you can hold in your hands and be able to say, ‘I did that.’”

Anderson’s sentiment is one shared by the roughly 50 students who are part of the extracurricular program, as each voluntarily devotes time to the team’s competition and non-competitive projects — including fundraising, outreach and educational activities — throughout the school year and summer break.

Based in Las Vegas, Nevada, CMHS created its robotics team in 2001 under the umbrella of a non-profit educational program called For Inspiration and Recognition of Science and Technology, or FIRST®, with the leadership of instructors Marc Rogers and Joe Barry.

“Coming in knowing very little about machining, being able to look at the 2D drawings enabled me to understand what our end product would be.”

“It was really the interest and enthusiasm of our kids that pushed us over the edge and made us decide that starting the program was a good idea,” says Rogers, a chemistry and engineering instructor who has enjoyed watching the program grow under his mentorship.

Founded in 1989 “to inspire young people's interest and participation in science and technology,” according to information published by FIRST, the organization designs “innovative programs that motivate young people to pursue education and career opportunities in science, technology, engineering, and math, while building self-confidence, knowledge, and life skills.”

The FIRST Robotics Competition, or FRC, is an international high-school competition in which the CMHS team competes. The contest consists of a six-week challenge that entails the construction of task-oriented robots of up to 120 pounds.

To machine parts for the robots, the CMHS team has used the SURFCAM computer-aided-manufacturing (CAM) solution, by Vero Software, since 2007. Prior to implementing SURFCAM, the team didn’t use any type of CAM software to produce its robot components.

Kirstie Ritz, the team’s resident SURFCAM expert and fabrication specialist, is also the lead on the team’s milling machinery. Now a junior, she became interested in learning CNC programming when she was an eighth grader, as her older brother was the team’s former CAM lead.

“I would watch everything my brother would do in SURFCAM, and that was how I learned,” says Ritz, who spent 349 hours over a six-week time span on the team’s most recent six-week challenge.

Anderson also learned by watching: She shadowed the team’s previous CAD designer for a year before taking over the role.

The most recent challenge for the CMHS team was the FIRST Steamworks project, a steampunk-inspired game that included using robots to deliver gears and Wiffle Balls that doubled as “fuel” to designated locations — such as “boilers” — to prepare “air ships” for flight. Points were earned by building “steam pressure” generated by the Wiffle-Ball fuel, and by engaging gears that powered rotors on the air ships. As the competition required both autonomous and human-controlled robot movement, the CMHS team held tryouts for would-be drivers.

In the Spring of 2017, the team won the FRC Utah Regional, which qualified them to compete in the FRC World Championship in Houston, Texas.  Competing against the best teams from the United States, Israel, Canada, Mexico, China, and many other countries, the Highrollers won their division at the world competition and went on to place third in the world.

“It was totally overwhelming at first,” Rogers says of the team’s debut robotics competition, 16 years ago. “You’re given a crate of miscellaneous motors and other parts — and you have to build a robot out of it.”

Projects at CMHS begin like those in any other shop, though on the robotics team each student is a potential designer.

“The whole team helps to prototype and design. Once we start to get the prototypes that we think will work, I take it from there,” Anderson explains. “If something doesn’t work, I try to think of ways of communicating so that we can work together to fix it. There is also math involved, so there’s a lot of making sure that it’s going to work in theory and then testing it to see if it actually does.”

Once a design is finalized, Ritz uses SURFCAM to program the parts, which are typically machined in aluminum. Using SURFCAM helps her to visualize the team’s projects, and to gain practical machining knowledge.

"SURFCAM was fairly simple to learn,” Ritz says. “Coming in knowing very little about machining, being able to look at the 2D drawings enabled me to understand what our end product would be. Being able to change colors and depths, then to see the various toolpaths, also helped me understand my machine better."

Melanie Sanchez, the team’s vice president and a fabrication specialist, is the lead on the team’s lathe equipment; she plans to take on additional machining duties as her knowledge grows.

Sanchez is also heavily involved in the team’s outreach efforts and actively supports the inclusion of young women in the program.

“In the past, mostly boys have been involved, and sometimes that’s because girls can feel intimidated or insecure about joining, even if they’re interested,” she says. “The majority of our officers are currently girls and we’re trying to keep up our 50 percent boy-girl ratio. We did make a conscious effort to get girls more involved, and it worked.”

Cody Wall, a graduate of CMHS and former member of its robotics team, has served as the school’s Robotics Camp director for 11 years. A series of annual summer camps for elementary, middle school and ninth-grade students serves the dual purposes of fundraising and outreach. More information about the camps can be found at:  www.technologycamps.org.

“The first camp was only 12 students, but then it grew to 24 — and the largest so far was 120,” Wall says. “We have helped other schools to start camps of their own in addition to hosting ours, so it’s a model that works in a lot of different ways.” Wall has helped schools as far away as San Diego, California, to establish their own robotics camp programs.

Fundraising is crucial for the team, as operational costs can be prohibitive. Considering that each competition is $5,000 — the team competes three times a year —  and that the cost of shipping a robot can be as much as $2,000, robotics is not an inexpensive pursuit. Several members of the robotics team have traveled to China during the summer to compete, as well as to teach —another costly but worthwhile endeavor.

“From doing this, I learned to love CAD and design,” says Anderson, who — like fellow seniors Ritz and Sanchez — plans to attend college and earn a degree in mechanical engineering.

For more information about the Highrollers, visit their website at  www.team987.com.

Business: Building robots for educational and competitive purposes, and establishing and hosting camps for robotics education.

“Coming in knowing very little about machining, being able to look at the 2D drawings enabled me to understand what our end product would be.”